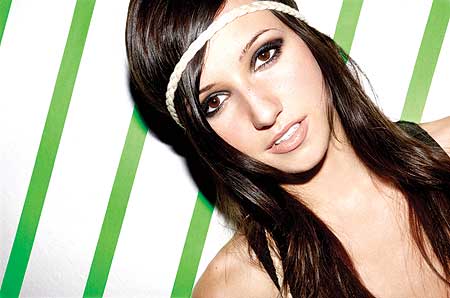 …Lights has been on our list of people to go slightly mental about for about 18 months now. That list is getting out of control. One day we are just going to post a story con­tain­ing 80 MySpace address and we'll just tell you to get on with it. In the case of Lights here's her MySpace and here's her official site.

Things we like about Lights include but are not limited to:

3. The fact that she uses her lovely voice on the sur­pris­ingly large quantity of above-mentioned synthy pop tunes. She is basically already halfway between popstar and superstar and that's all good as far as we're concerned.

Lights has achieved a fair number of the things that it seems all artists from the other side of the Atlantic seem to have on their CVs these days: she's had a song on The Hills, she's had another song on an advert­ise­ment, etc etc etc. Sometimes you see all this stuff and you just want to run into the street, fall to your knees and weep "WHY IS IT NO LONGER GOOD ENOUGH FOR SOMEONE JUST TO HAVE RECORDED SOME REALLY GOOD SONGS THAT PEOPLE ARE GOING TO REALLY LIKE? WHY DOES EVERYTHING NEED TO HAVE SOME SORT OF ASSOCIATION WITH SOMETHING ELSE? ISN'T GOOD MUSIC GOOD ENOUGH ANY MORE?".

Anyway Lights — 21-year-old non-ugly Canadian singer song­writer Valerie Poxleitner — has appar­ently been in the UK for the last week or so and has APPARENTLY also released an EP digitally in the last fortnight through Warners/Dog House. There'll be an album out in the Autumn but here's the EP for the time being. (The EP actually seems to have been on iTunes since last year so we don't know what's going on with that.)

Valeria is about to leave the country but she's got one London show left — THIS AFTERNOON at the Brixton Academy as part of the Give It A Name Introducing tour. Be warned: the tour features some truly terrible musical artistes and you are advised to get there for Lights, see Lights, then fuck off. She's on at something stupid like 5pm (yes we know) but if you miss that you can always travel to Manchester to see her per­form­ing tomorrow night. Perhaps you already happen to be in Manchester — the planet doesn't revolve around London you know!*

* Point of inform­a­tion: the planet does actually revolve around London, the greatest city in the world.

Still to come today on Popjustice