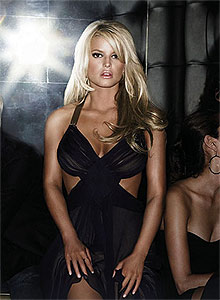 'Here at Popjustice', there's nothing we like more than a ter­min­ally ropey pop idiot making an amazing pop record.

Already this year we have had suprising pop triumphs from Paris Hilton and Muse, and now Jessica Simpson has unveiled 'her' new song, 'A Public Affair', which turns out to be all kinds of brilliant not least because it sounds rather a lot like 'Holiday' — a Madonna song from the olden days.

Anybody with doubts as to the song's general amaz­ing­ness should note that its lyrics include the phrase 'carte blance'.

You can listen to it at Jessica's official website.

They've made things simple for her — it's just www.jessicasimpson.com.

Next week on Popjustice…