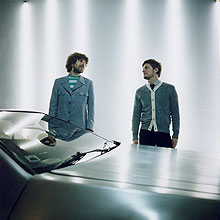 In an attempt to make the song even more brilliant the band asked Richard X to have a word with it. After a few weeks Richard X had finished and, as a relief to all, he had indeed made the song sound even better. Kind of like a 'chart hit'. That sort of thing. Neon Neon have not had a proper chart hit yet even though they deserve one.

Anyway in an amazing twist of fate/lunacy the band won't be including the RX mix in any of the com­mer­cial packages (literally WTF) so we're offering you a free and totally amazing download of the remix.

Here is a video we have made.

Amazing.  The single's out (without the Richard X mix) in a few weeks…

You've got to to hand it to Billiam