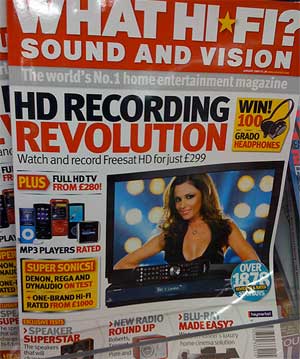 We think the cover of 'What Hi-Fi*? Sound And Vision' magazine says a lot about Cheryl Cole's 2008.

The magazine's editorial team could have picked a picture of anything in the world to go in that TV screen on the cover of their magazine. They decided to use one of Cheryl.

It doesn't really seem like much until you start to think about it: instead of a still from any of 2008's big movie block­busters, or instead of a model, or instead of some family-pleasing shit like Wallace & Gromit, or instead of the winner of a football com­pet­i­tion or a man going round a corner on a motorbike, Cheryl Cole is the one thing deemed suitable to show off how brilliant a tele­vi­sion is, and the one thing predicted to sell copies of the magazine. Yes we know Cheryl's pop and TV career means that she embodies the magazine's sound and vision 'values', but still.

Things like this are a worry, though.
With her pop career, her TV career and her showbiz/marriage career Cheryl Cole is now famous for being Cheryl Cole. We des­per­ately want Girls Aloud to take a year off but if they do, and if Cheryl throws all her attention into Being Cheryl Cole, will Girls Aloud simply become the band she sings in when she's not doing other stuff? Some would say they already have…

* For younger readers — you know your iPod? And you know your computer? Well, in the olden days your grand­par­ents used to listen to their music on something called a 'hi-fi'. They would use them to play 'vinyl records' (those 'picture disc' Girls Aloud singles you've been buying have actually got music on!) and CDs (basically like CD-Rs but you couldn't record onto them — no wonder they died out). The 'hi-fi' would sometimes go in the corner of a room and people would listen to music together — don't forget that in the olden days people thought that music was fun to listen to with other people, and they hadn't yet realised that it was obviously far better to exper­i­ence music sitting in the dark at your computer with head­phones on.