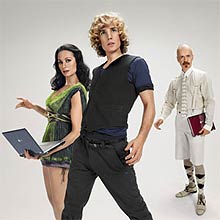 One of our favourite bands, BWO, are back this year with a new album.

Here are the facts of the matter.

» The new album is called 'Fabricator' and it is out in September.

» The first single is called 'Save My Pride' which will start knocking around in a month or so.

» 'Save My Pride' used to be an Alcazar song but BWO have turned it into — their words — "a big and dramatic electro anthem".

» The band's new album has a "hyper-elec­tronic sound" (hurrah) but isn't finished yet (boo).

That is about it for the time being.

We do not know exactly what happened to the whole 'launch BWO in the UK' business but we are sure it is pencilled in for some point in the future. UPDATE! It's underway.

Triumph of a art