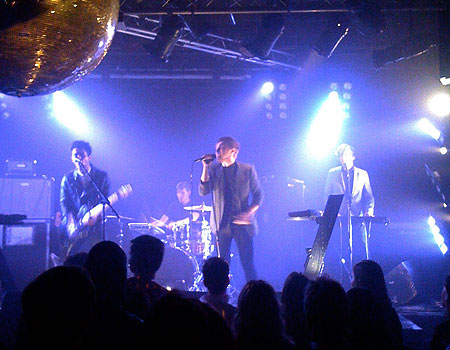 Not our words, viewers, but those of Popjustice Twitter follower @fraserwashbag (not, we suspect, his real name) in response to the above pho­to­graph, tweeted by us last night from a pop concert by Dekade. In the cold light of day it doesn't really look very much like the Human League, but it does look a lot like Top Of The Pops, and that's no bad thing.

In last week's piece about v brilliant new duo Diagram Of The Heart we ran through a handful of pop's other up-and-coming elec­tronic duos — Hurts, Visitor, Monarchy, The Sound Of Arrows — but we neglected to mention Dekade (that's Dekade as in 'decade' not 'decayed' FYI), the duo who worked with Xenomania under the name NiteVisions, were known as The Electric City in a prior incarn­a­tion, and have more recently working with producer Flood on some probably-soon-to-be-released popular music.

For rather obvious reasons they sound a lot like Duran Duran but on the evidence of last night's show (with its carefully struck poses
and over­act­ive collar popping) Andy and James are at their best both in
song and in per­form­ance when they relax into what they're doing and rather more press­ingly there's a danger that it's just too stylised and too true to its 80s roots for the duo to find their own identity. It would be a waste for Dekade to suffer a fate similar to that of the also-quite-good noughties almost-weres The Modern.

The second track Dekade played last might was Really Officially Brilliant and you can hear 'Haunt You', the song they played as their opening number, on the Dekade MySpace. The duo are also manning a quite enigmatic Twitter at the moment, if following them there is an idea that appeals.