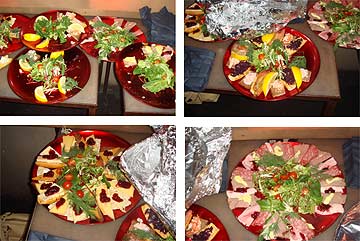 We went to see Marion Raven do a lunchtime showcase yesterday. The per­form­ance was quite good in a not-quite-as-good-as-Kelly Clarkson kind of way.

The good thing about lunchtime showcases — WHEN THEY DON'T MOVE TO 2.30PM AT THE LAST MINUTE — is that popstars are legally obliged to provide food and this often ends up being a buffet. Buffets as we all know are com­pletely amazing.

Themed buffets, however, can be hit and miss. This Norwegian one because Marion Raven is Norwegian was horrible. :(

Other things that happened:

1. A glass broke when she hit a high note in the first song. But it was because a barman dropped it and not because of her amazing vocal range. Nobody except us found this funny.

2. She played a guitar AND a keyboard. She even plugged the guitar in herself — quashing the idea that women are rubbish at those sorts of things.

3. She drank some green tea on stage. Woo!

4. She mentioned that 'I Will See You Crawl' was about an idiot boyfriend who crashed a car, dumped her, and cleared off. Lots of the songs on the (quite good) album are about him, appar­ently. Get over it love etc etc.

5. She also announced that she was conceived to 'Bat Out Of Hell'. :(