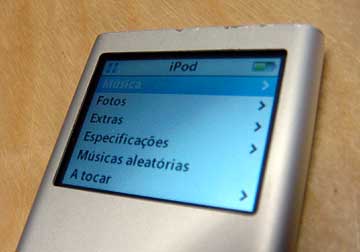 Yesterday morning we found this iPod (above) in London. Its location meant that there was nowhere to hand it in so rather than just leave it for someone to steal we decided to bring it home, feed it, bathe it and clothe it, and to try and reunite it with its owner. From the language settings we believe the owner may be either a tourist or someone whose first language is not English.

Obviously, we gave it a spin on the office stereo yesterday afternoon and were treated to an upli­fit­ing selection of Christian choral music, so there is a pos­sib­il­ity that rather than being a genuinely lost iPod this is a very modern way for a religious organ­isa­tion to 'spread the word'.

Anyway if it's yours, email us…

…and tell us where you lost it and what your most played track is.

When you look back on the campaign for Natty's last single, what will you remember?

The Ladyhawke album is truly amazing