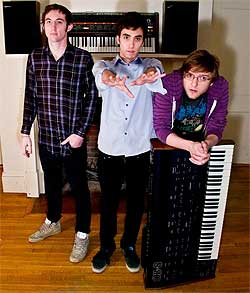 Today's Song Of The Day is called 'Tuff 'N' Stuff' and it is by a band called Giantess. Hold on to your hats:

» People (eg 'taste­m­akers' and 'etc') will say they're better than they actually are but that doesn't mean they're not good.

» They are produced by someone out of Passion Pit, another band who are
quite good but let's be honest not quite as good as everyone says they
are.

» They're releasing their first UK single through Neon Gold,  the very happening label which has got Marina & The Diamonds and Passion Pit on it and is run by someone who's like eight years old or something.

» In the music industry? Going down to Brighton in May in order to take
a load of drugs and somehow put the whole lot through on expenses,
shortly before you lose your job due to cutbacks in the industry
combined with the overall economic climate? You're in luck! Giantess
are doing their first UK shows at The Great Escape.

» If you're  in Boston, Massachusetts or Boston, Lincolnshire drop us a
line and tell us why your current 'environs' are amazing and we'll
compare your notes in order to compile the defin­it­ive Boston vs Boston
'dossier'.

» If you're not feeling it yet beware — every time you say you don't believe in Giantess, a hipster blog­mas­ter dies. :(

It's 'boybands in the snow' Monday