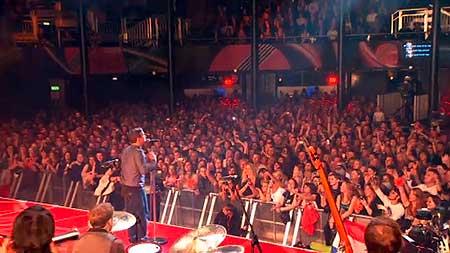 Robbie Williams' Electric Proms concert last night was really brilliant — lasers, 'No Regrets', 'Video Killed The Radio Star' accom­pan­ied by Trevor Horn and even a little bit of 'Rudebox' as the show neared its close.

One par­tic­u­lar moment sticks in the mind: between songs, Robbie talked about his grey hair and said to the audience, "we're getting old, aren't we?". On one level the 'we' bit was a fairly clever if clunky psy­cho­lo­gical trick aimed at getting the audience on side, because 'we' are all in this together, aren't we? But the 'we' comment was also inter­est­ing in light of Robbie's X Factor appear­ance, which had proved divisive in terms of Robbie and his audience. Last night was an instance of Robbie com­mu­nic­at­ing directly with his audience, bypassing a chat­ter­ing media which really wants him to fail (like most artists he's much more use to the tabloids when he's on his knees) to access a fanbase which, having grown up and now started to grow old with Robbie, really wants him to succeed.

Anyway it was just a small moment so we probably shouldn't read much into it, but the theme of artists being able to swerve the critics continued when we got home and the show was being screened on TV. As well as taking the impact out of any neg­at­iv­ity likely to appear in the following morning's reviews, providing an almost instant screening of the per­form­ance was simply a great idea for people who couldn't get tickets for the show.

It was an idea which went down less well with a certain broad­sheet newspaper reviewer.

Then, an hour later:

Here's that Marina & The Diamonds video (and a free MP3)

Do any of you lot fancy coming to this?