Here's how to do it if you fancy having a Number One yourself in 14 months.

1. Record a song that is obviously worthy of being a massive Number One

This is it. It is 'I Love It' by Icona Pop feat Charli XCX. You may have heard it once or twice.

It's not the sort of song that makes you think 'this is not a Number One hit single', is it?

25 years ago, in their book The Manual: How To Have A Number One The Easy Way, The KLF advised that anyone serious about having a Number One single should first ensure that they are unem­ployed and on the dole. Icona Pop expertly posi­tioned them­selves into just this sort of scenario when they got them­selves dropped by Mercury. We're not certain of the timeline here but basically Icona Pop were signed to Mercury in the UK and they went through the whole "ooh look at this cool band whose faces you can't see properly in any of their photos" thing, which despite being accom­pan­ied by great music didn't really get anyone very excited.

At the start of May 2012 ‘I Love It’ goes online for the first time; on May 4 it's a Popjustice Big Song. We note that it sounds like "a Top 5 single in the proper actual charts, an instant floor­filler and an early bid for 2012's big summer pop anthem". We're a year early. Or maybe 'I Love It' is?

4. Do a video for the single

Number One singles need videos. They don't always need to be very good.

By the time 'I Love It' is Number One in the UK, this will have had over 26m YouTube views.

Again, the timeline here is a bit fuzzy but after the whole Mercury thing Icona Pop sub­sequently signed to Atlantic in the UK (from what we gather, this was pretty much on the strength of 'I Love It', and there might have been some link with Atlantic also having Charli XCX on their books) while still being on other labels around the world.

6. Release the song internationally, gradually and a bit confusingly

On June 2012, having already released 'I Love It' in Sweden, Icona Pop also release the single in Australia, where it goes 4x platinum. As the 'I Love It' story unfolds in the UK, the song's released in Austria, Belgium, Canada, Czech Republic, France, Germany, Hungary, Israel, Italy, Japan, Mexico, Netherlands, New Zealand, Portugal (we're copying this off Wikipedia by the way), Slovakia, Spain, Switzerland and the US. On top of the success we've already mentioned 'I Love It' goes Top 10 in thirteen countries, going gold in Austria, Belgium, Italy and New Zealand, platinum in Germany, Sweden and Switzerland, and double platinum in Canada.

7. Allow the song to appear on a sort of cool TV programme

On January 27 'I Love It' features in HBO's Girls.

The next day, Popdust publishes a piece titled "Is Girls Finally Gonna Make a Hit Out of Icona Pop’s 'I Love It'?". The song gradually starts to climb the US iTunes chart, then drops off a bit.

8. Do a nice performance of the song at an awards bash

We don't really think this January 29 per­form­ance at the P3 Guld thing (we have no idea what this is) is integral to the song's UK success but we're just found it on YouTube and it's a pretty great per­form­ance, right?

9. Perform 'I Love It' in front of some sort of cool people

On March 12, Icona Pop and Charli XCX perform 'I Love It' together for the first time at SXSW.

"'I Love It', recently propelled to an alto­gether new level of omni­pres­ence by its sage inclusion in coke-binge sequence on the HBO series Girls, is every­where in Austin this year," writes Canadian website The Star. "So, too, is Icona Pop itself."

10. Perform 'I Love It' in front of some sort of uncool people

On March 26 things really start to kick off when Icona Pop perform 'I Love It' on big US TV show Dancing With The Stars.

As we say at the time, "it’s the sort of strange but brilliant booking you can’t imagine a com­par­able UK show pulling off".

11. See the song climb the US charts

Following the Dancing With The Stars extra­vag­anza the song starts to climb the US iTunes chart again; it even­tu­ally hits Number 7 in the proper Billboard chart, which sends a strong message back to the UK re this song's amaz­ing­nesss. 'I Love It' has been available on iTunes as part of the 'Iconic' EP, but by this point has mys­ter­i­ously dis­ap­peared from sale. Some people throw their toys out of the pram about this, but it's a pretty good sign — the label are trying to build demand while a proper release plan takes shape.

12. Get a long-awaited thumbs up from Radio 1

Radio 1 support has been a little tricky for Icona Pop so far, but this changes on May 3 2013, one year after 'I Love it' first appeared online. On this day 'I Love It' gets its first recog­ni­tion from Radio 1 when Music Policy Executive Nigel Harding tweets the song.

Here's an inter­est­ing clip of Nigel talking about how to get playl­is­ted on Radio 1, from March this year. (The gist is 'get loads of YouTube views first'.)

13. Find yourself on a big Samsung advert

From May 3, Samsung also uses 'I Love It' in a fucking massive TV ad campaign for its Galaxy S4. In it we see a load of sportsmen 'getting pumped' by listening to Icona Pop feat Charli XCX.

It's quite rousing isn't it.

14. Get the whole Glee treatment

On May 9, Glee's season finale includes this per­form­ance of 'I Love It'.

As Rolling Stone say, "the cover maintains the original track's hard electro beat and dance-pop vocals, then throws in the show's signature harmonies and some impress­ive solos. We can only hope it serves them well on their road to Nationals". How about serving Icona Pop well on their road to a UK Number One though?

On May 9, having pre­vi­ously been scheduled for UK release earlier in the UK, 'I Love it' is finally confirmed for a June 30 release.

On May 15, in an interview with Billboard, Taylor Swift has this to say:

Sportspeople! Taylor Swift! Is there nobody on the planet who doesn't use this song to get them­selves 'pumped'?

17. Feature as the music on BBC Eurovision trails

In the week leading up to the May 18 Eurovision final, the BBC uses 'I Love It' in its pro­mo­tional clips.

We don't want to reopen old wounds here but imagine if we'd sent Charli and Icona Pop to represent the UK with 'I Love It'. IMAGINE.

18. Note with interest that Capital FM are playlisting the song

The general rule for non-Global acts is this: Radio 1 make hits, Capital FM play them. In normal cir­cum­stances this works well for all concerned but in this instance Capital take the unusual step of whacking ‘I Love It’ on their playlist before Radio 1 have made their move.

It’s fair to say that one of the songs on Demi Lovato’s album — the Cher Lloyd duet 'Really Don't Care' — takes one or two cues from ‘I Love It’.

Which is fair enough. 'I Love It' is a pretty good song.

20. Finally get on the Radio 1 playlist

On May 29, 'I Love It' appears on the Radio 1 playlist for the first time. C‑list for now.

On May 31, while ‘I Love It’ picks up pace in the UK, Icona Pop choose to drop ‘Girlfriend’, a song that works on similar lines to ‘I Love It’ with the crucial dis­tinc­tion that it is not as good.

23. Whack out a Tiesto remix

This appeared a couple of weeks into June. It's quite a 'toe tapper'.

It's the latest in a fairly long line of remixes, none of which are as good as the radio edit but that's pop, right?

24. Hold your nerve while a cover version climbs the charts This is always a good sign that a single is about to be a hit: iTunes is flooded with shit­tor­iffic cover versions. It becomes a problem when they start to sell in large enough quant­it­ies to harm your own eventual sales, but you've got to love 'Power Hitz', right?

25. Get a bit nervous re the whole cover-version-climbing-the-charts thing and bring forward the release a week

On June 20, it's announced that 'I Love It' will move forward a week.

By the following morning it's Number One on iTunes.

27. Put up some nice posters around London 28. Finally, after eight million years, be Number One in the UK.

And that, as they say, is that. Easy! 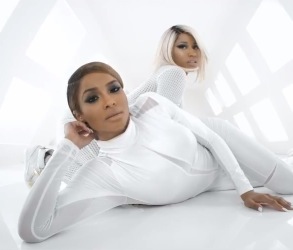