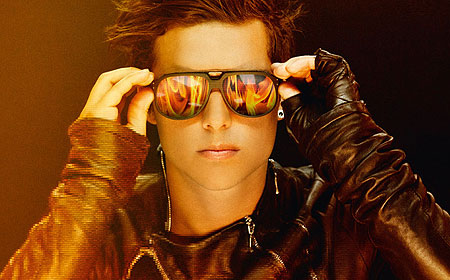 Swedish mini-icon (and the people's Eurovision winner) Eric Saade released 'Saade Vol 1' earlier this year. It's one of the year's best pop albums and we're still listening to it a lot.

'Saade Vol 2' is on its way for Christmas and the lead single features a turn from the notori­ously-hard-to-get-hold-of enigma Dev.

It is set in a club (yes we know it is hard to believe), it's called 'Hotter Than Fire', it features Eric Saade saying "Dev!" and Dev saying "Eric Saade!", it includes the lyric "I'm flammable — I'm TNT", and it sounds like THIS.

This single is out on November 2 in Sweden; the album's coming on
November 30.

In other news, we're hearing reports that Eric recently purchased a tent large enough to use for social functions like weddings and summer fetes. Apparently he's calling it the M(That's enough of that thanks — French Revolutionary Ed)

A Newsdump for 31 October 2011: From 'Pro' Green's nan's CD upset to a Perry presidential safe bet