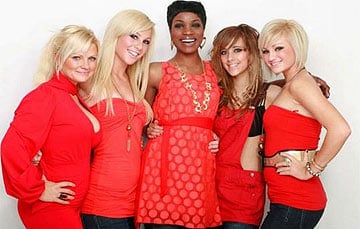 This is a new girlgroup (yes another one) called From Above. The members include Daisy from S Club 8 and some people who were on Dance X.

After a strategy meeting with regards to current music trends and
industry require­ments, it was decided ’from above’ would bring
cred­it­able melodic pop with an urban twist into a 5 piece harmony girl
group.

All 5 members would not only have to look super sexy
and be able to dance, but the vital ingredi­ent would be all 5 have to
be able to sing live harmony and not mime!

Bam music then
set about closed auditions for a select few from past and present music
industry. The auditions were held at the elite recording studios — Box
Clever, Soho Studios, and London, managed by Robin Axford

Once the ’potential’ final 5 were selected, Hollywood Dance Academy and
top Pineapple Studio’s UK cho­reo­grapher Mark Battershall put them
through their paces

…and so it continues.

What are the songs like? They're fine. Not bad. Not good. Fine.