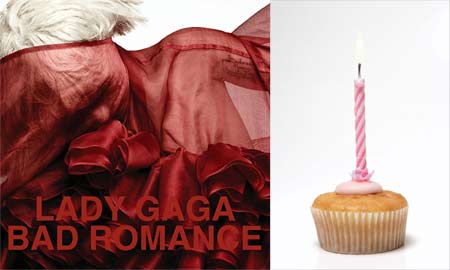 The Queen, famously, has two birthdays. One on the day she was actually born, and another because she considers an entire life of inherited privilege not quite good enough and simply fancies a second load of presents every year, this time in the summer when the weather is nicer. Well done The Queen for the totally ridicu­lous life you lead.

So there's the date the song was first written, on a tour bus in Norway, which we're guessing was on July 30 2009. On October 2 a demo of the song leaked online, which is another sort of birthday, while the song's official premiere was four days after that at Alexander McQueen's Paris Fashion Week show. The birthday we like most, though, falls on the date that 'Bad Romance' was first released into the wild, in the manner of one of those beautiful doves at the Michael Jackson trial, and that date is October 26 2009, meaning that October 26 2010 — that's today, calendar fans — marks the first birthday of 'Bad Romance'. (It might have come out in different formats in different ter­rit­or­ies but let's not allow all that to get in the way of things — Wikipedia has it as October 26 so October 26 is 'Bad Romance' day.)

So where were you the first time you heard 'Bad Romance'?
Actually let's not bother going down that path, you were probably
sitting in front of a computer like we were. The point is that regard­less of how or when you mark one year since you first felt the full force of the robotic, jewelled fist of 'Bad Romance', 297 million YouTube views later 'Bad Romance' is and forever will be com­pletely amazing.

Let's all watch the video.