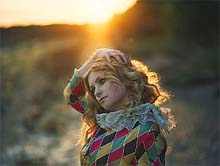 The new Goldfrapp stuff isn't proper folk at all, it's just that it's not all the sound of a robotic donkey being attacked with a space-age angle grinder.

Here is some waffle about four of the songs off 'Seventh Tree'.

'Little Bird'
Is: A sort of undu­lat­ing, initially beat-free atmos-frenzy which turns into a bit of a Kate Bush song halfway through and becomes exciting without you noticing largely due to various "la la la la la la" bits.
Isn't: About an actual bird. It is a simile. "She's like a
little bird," Alison sings. "She flies from A to B to see what she can see she's far
away from me." Although perhaps it is about a bird — just a big bird who is 'like' a little one. Is it about Big Bird from Sesame Street? Almost certainly.
'Out Of Ten': 8/10

'Happiness'
Is: Atmospheric and nice. It contains Jim'll Fix It-style "ba ba ba"s. Probably good for pre­tend­ing you are in a marching band or something if you are drunk.
Isn't: Very danceable. But then neither was 'Candle In The Wind '97' and that was bloody amazing.
'Out Of Ten': 8/10

'Clowns'
Is: Good.
Isn't: Exactly devoid of acoustic guitars, which is to say that it has got some of them in it. If you like the idea of a slightly synthy (or maybe it's real strings, we literally don't have a clue about these things) floaty acoustic thing which sounds like Siobhan Donaghy then you will give this song the thumbs up. We like that idea — and we also like the executa­tion, so it's already getting the thumbs up here at PJHQ.
'Out Of Ten': 7/10

So that's an overview of some of the Goldfrapp stuff or at least the four tracks they've sent us in an annoying 'stream' which keeps crashing our web browser.

The overall effect kind of makes 'Felt Mountain' sound like a Gallows album and you won't be dancing to any of these four tracks, but nobody wanted 'Supernature 2' ("Yes we fucking did" — The World) and these four songs represent a confident and unself­con­scious decision to pursue a true creative path. It's also doing that at what we think will probably be the expense of 'Supernature'-size record sales, which is a pretty impress­ive reflec­tion of the sort of 'artistry' and 'vision' which made Goldfrapp so likeable and inter­est­ing in the first place. The album's out in February next year.

The Chatter Of Popjustice 8

Leona Lewis — 'The Best You Never Had'