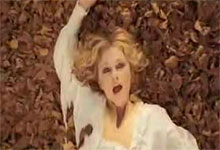 We are loving the Goldfrapp album a lot, and by 'album' we do of course mean 'four songs sent to us by their label' because of course it is illegal to have down­loaded the leaked 'Seventh Tree' in it entirety.

As we noted last year the first single ('A&E') is out next month and the video's been buzzing around on the web over the last 24 hours. It is really really good and a great showcase for one of 2008's most beautiful pop tunes. The video starts off giving the impres­sion that it will be boring but, much like the album, turns out not to be at all.

It also features the best 'making a cup of tea' sequence you'll see in ANY music video this year.

And, for the benefit of people who don't look at any websites other than Popjustice and haven't seen this on 1,275 blogs already, this is the album sleeve. 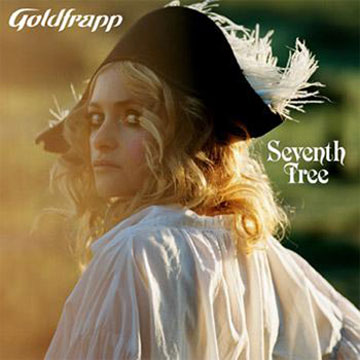 Now, we don't want to hit you around the head with our impress­ive 2:1 in Media Studies yet again but we think we might just be able to unravel the complex semiotic statement Goldfrapp are making with their new artwork and video. You see, this album is more ORGANIC sounding and more NATURAL and SOFT sounding than their last one. So there are LEAVES and BROWNS and SOFT FOCUS. Do you see. We know it's a subtle message they're sending out so we thought perhaps you might need it pointing out.

The Newsdump, Jan 9 08: from Robbie's plans to Eminem's glands