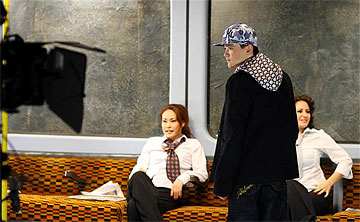 We have been listening to Britain's Got Talent winner George Sampson's jaw-dropping new single, 'Get Up On The Dancefloor', on repeat for about half an hour. This is either one of the most unex­pec­tedly good singles of the year or a new low in a pop­cul­tural year that has already given us Hole In The Wall and Kerry Katona's horrible tits. We think it's probably brilliant — we'll get back to you on that. The long and short of it is that the song takes the form of a big medley-style mashup featuring samples (probably not actual samples, that wouldn't make financial sense at all!!!!) from danceable hits of the last few decades.

We think the video works really really well — you can watch it here.

If George's people 'target' the 'right demo­graphic' and 'load' the release with 'great content' through the right sort of Bebo part­ner­shipszzzz they might just get this away — George seems like a good bloke and is genuinely liked by people of his own age, in the same way that Lil' Chris was a couple of years ago. It's going head to head with Take That, McFly and a load of other big acts when it's released on November 24, so this could really be a case of 'Sampson and Goliath'! (David and Delilah are unavail­able for comment.)