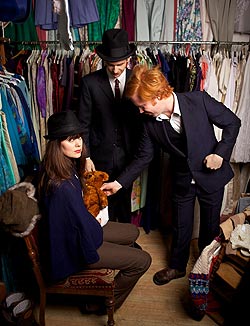 2. Beyonce Knowles
'Run The World (Girls)' is a strange old affair (ie it's a bit of a mess, sim­ul­tan­eously brilliant and a complete waste of everyone's time) but none of that is important when you consider that there is a Beyonce album coming and that means there HAS to be a big old Beyonce downtempo blubathon on the horizon. Another 'Halo'! Another 'Irreplaceable'! Another (YES WE GET THE IDEA — BALLADS ED)
» More Beyonce Knowles

3. Six D
We've put this new act's track '2 Seconds' as Song Of The Day today. As we mention in the Song Of The Day writeup they're a big priority for Sony and the general 'vibe' is Diversity-meets‑S Club. We are, as they say, 'loving their work'.
» More Six D

4. Little Majorette (pictured)
We wrote about Swedish trio Little Majorette about a year ago. In a nutshell: they were amazing. Well they still are — their debut album arrived in the post a few weeks ago and we've been hammering it ever since. Genrewise it's floaty Swedish dreampop and if you like your Robyns and Annies it will be right up your street, although Little Majorette don't sound like Robyn or Annie. It looks like the album is out in Sweden as of last week (buy here from ace Swedish online pop emporium CDON.com) but online clips don't seem in any great abundance. (It's also on Spotify but you can't listen from the UK.) If you're desperate to buy something their 'Bite The Bullet' EP from last year is still available on UK iTunes. Here's one track, 'Never Be The Same', which is produced by Petter from the band's brother.

(Petter from the band's brother IS ONLY BLOODY PONTUS OUT OF BLOODYSHY & AVANT!!!)
» More Little Majorette

5. Frankmusik
New single 'Do It In The AM' is bril­liantly stupid and stupidly brilliant. Here is the proper version plus some unne­ces­sary remixes.

666. 'Pitbull'
You have to hand it to Pitbull! 'It' being a greetings card with the message "WHAT A MASSIVE USELESS FUCKHEAD YOU ARE" written on the inside, signed by the pop­u­la­tion of planet earth.
» More 'Pitbull'

Frankmusik production, Keane sample, chorus with oh-oh-oh in it: Colette Carr's onto a winner