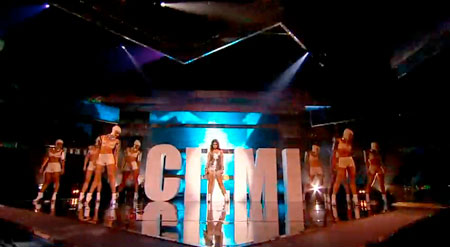 On Saturday night Gabriella Cilmi performed her new single 'On A Mission' on Let's Dance For Sport Relief. It's a great per­form­ance with BEACHED SYNCHRONISED SWIMMERS and a BIG CILMI, although we're not sure about the 'bending quickly forwards as if in pre­par­a­tion to be sick' dance move but if that's what The Kids are doing these days then who are we to question.

Here is the per­form­ance. (Keep an ear out for the 'Weekend Primetime Studio Audience Clappalong' — the worst aspect of any such appear­ance but par­tic­u­larly demented in this instance.)

How you interpret what we say next will hinge quite sig­ni­fic­antly on whether your love of pop extends any further than 'Toxic', three Girls Aloud singles and an increas­ing ability to acknow­ledge that Lady Gaga might not be all that bad, but as this campaign unfolds there's a real feel of 'Come And Get It'-era Rachel Stevens to the whole thing. It's a sim­il­ar­ity not just in the performances…

…but also in the sense of Gabriella's forth­com­ing album 'Ten' being the sort of fully-realised elec­tronic pop album one rarely hears in the world of man­u­fac­tured pop (or outside the world of Girls Aloud). On 'Ten' there are two songs styled on the post-Winehouse soulpop of Cilmi's first album — rather tellingly these are both tacked on the end of the album but remove them from your iTunes playlist (as most listeners will, as they're not terribly good) and, like 'Come And Get It', you've got a super-stylised, tune-heavy modern pop album which feels like a full body of work. The key dif­fer­ence with the benefit of a few years' distance is that Rachel promoted her album with all the excite­ment and gusto of a Poundland checkout girl and one of the best British pop albums of the last ten years is unfairly remembered by pop fair-weather fans, but Cilmi puts on rather more of a performance.

Will Gabriella — despite a not entirely unex­pec­ted lack of enthu­si­asm from Radio 1 — fare better than Rachel?

Well we don't know do we, we're not psychic.

The Newsdump, March 1 2010: from DeRulo atop the charts to Goulding's fluttering heart