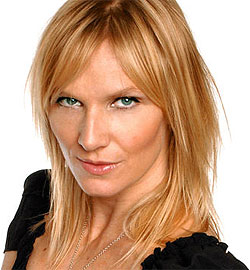 Over the last few years Jo has become the poster­girl for landfill indie and, to some, a cheer­leader for everything that is the opposite of brilliant pop music. Her name has become syn­onym­ous with terrible guitar bands but it's become an obsession that doesn't always bear much relation to the reality of the situation.

For a start, at the very heart of it, Jo Whiley is a broad­caster not, for example, just some moron off the telly who's been given a radio show. That's one good thing.

A true
and genuine passion for music — ANY music, except acid jazz — is better than no passion at all. And it is a million times better than some sort of
transient, clueless, cool-chasing, found­a­tion­less and inane obsession with 'lifestyle rock'. Or, to put it another way, if you're happy today that Jo Whiley's leaving daytime Radio One, try her replace­ment Fearne Cotton for two weeks then tell us you don't want Jo back on air.

Yesterday's Song Of The Day in watchable form