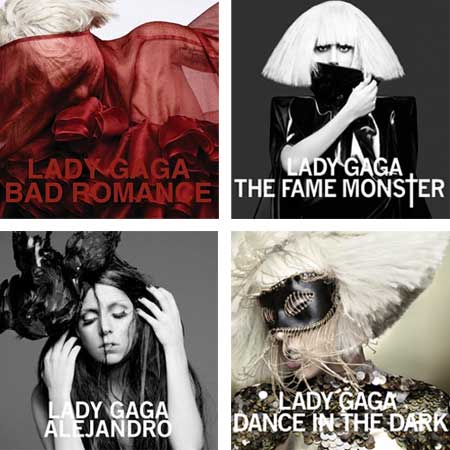 There was lots of Lady Gaga action over the weekend: 'Bad Romance' (top left) entered the Top 10 and 'Fame Monster' (top right) album track and digital buzz single (hence sleeve) 'Dance In The Dark' (bottom right) also leaked (and is today's Song Of The Day). Artwork for another digital buzz single — the pre­vi­ously leaked 'Alejando' — had also emerged (bottom left) before the weekend. We love how there's already an album campaign's worth of artwork for 'The Fame Monster'.

Which brings us to:

Also while on German TV Gaga premiered a small clip from her 'Bad Romance' video. It's basically fucking amazing.

Apparently the video, set in a Russian bath house, is about Lady Gaga being traf­ficked into sex slavery.

Yes that's all very nice darling but what about a nice video in which a couple are in love then have an argument then are back in love again?

Lady Gaga — 'Dance In The Dark'

Joe McElderry: voice of an angle