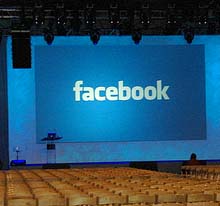 It is very nearly the end of the week so there are only a few more hours left in which to refresh Facebook before you can go to the pub. While you are still in the office perhaps you would like to consider signing up to offer your support to the following groups…

The russian Duo ( T.A.T.U )… aren't they hot :O!! THEY ARE NOT LESBIANS
Glad that has finally been cleared up. It was all getting a bit confusing what with Lena being very, very pregnant 'and all'…

Same Difference 4 X Factor
Apparently the winner of this year's X‑Factor will be covering Whitney Houston and Mariah Carey's 'When You Believe'. This is a duet, and unless Dannii is planning to sing it with Rhydian, we can think of only one other act in the show capable of pulling off a duet like that.

I'm Bleeding Love; A Leona Lewis Appreciation Group
She's like a reality TV Nosferatu. Look out, viewers, she wants your hemo­globin… (Or something.)

It's Not Wrong To Fancy Sophie Ellis Bextor
Well obviously…

Richard Archer Lovers Evrywhere!!!!!!!!
Hardly bustling, although mar­gin­ally more popular than the Sophie Ells Bextor appre­ci­ation group above. But who are we to know what people do and don't find attract­ive these days…

"Why do I need to know anything about Gabriella Cilmi?"