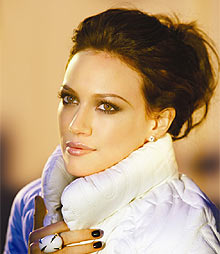 Well what do you know — the new Hilary Duff songs are pretty good.

She has dis­covered elec­tronic music. We think the recoding of her new tracks probably required at least a four-way plug adaptor from Dixons. Possibly even a five-way.

'So Yesterday' aside, Duff has never really excelled at knocking out a par­tic­u­larly good chorus. And while this is still by and large the case, her new pro­duc­tion values reflect the fact that she can no longer simply sell songs off the back off having eight years ago been in a mod­er­ately popular TV show which never really caught on in this country anyway.

Here is what Hilary's 'people' have to say about the whole thing.

Never mind all that — here are some knee-jerk reactions that will probably come back to haunt us in a few weeks.
Â» 'With You'
The best song of her career, pissed away by having been on an advert for her 'scent'. Sounds like producers from the good bits of Norway, rather than the bad bits of LA, were involved. Less time spent making smells and more time spent on making records like this might not be a bad idea.

Â» 'Stranger'
It has a rock and roll guitar on it. Something to do with that bad man from Good Charlotte no doubt.

Â» 'Danger'
Title rhymes with the last one, sounds very expensive and 'cool' but is let down with a chorus that is a quite 'flabby'.