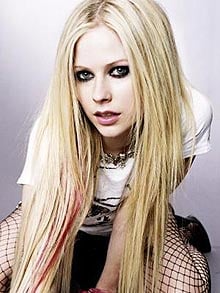 Avril Lavigne recently made a post on her blog in response to claims that 'Girlfriend' is ripped off from another song.

Here is what she says.

"To my dear media, friends, and fans,

You may have heard some
news that two guys who wrote for some band from the 1970s I have never
in my life heard of called the "Rubinoos" are trying to sue me. They
have a song called "I Want To Be Your Boyfriend" that has no musical
sim­il­ar­it­ies to the song "Girlfriend" that Luke Gottwald and I wrote
together. They claim that a small part of the lyrics are the same and
are saying that I took these from them. I had never heard this song in
my life and their claim is based on 5 words! All songs share similar
lyrics and emotions. As humans we speak one language.

Off the
top of my head, two other songs that I can imme­di­ately think of with
this type of lyric are "Hey, hey, you, you get off of my cloud" by the
Rolling Stones and "Hey little girl I want to be your boyfriend" by the
Ramones. Simply put, I have been falsely accused of ripping their song
off. Luke and I have done nothing wrong and there is no merit to their
claim.

I was going to be the
bigger person and not reply when I read Chantal Kreviazuk's article in
Performing Songwriter magazine. Now that all the media have caught on
to her little interview, I need to speak. Chantal's comments are
damaging to my repu­ta­tion and a clear defam­a­tion of my character and I
am con­sid­er­ing taking legal action. Chantal has accused me of taking a
song idea from her because I happen to have a song on my new record
with the same title.

For the record, I wrote a song with Evan
Taubenfeld which coin­cid­ent­ally has the same title as a song Chantal
had sent me a few years ago. Our songs have no sim­il­ar­it­ies and
opposite meanings, i.e. different lyrics, different melody, different
genres. In Chantal's own words "the only sim­il­ar­ity is in the title." I
ori­gin­ally wrote this with Evan for his record and I ended up with it.
Funny enough when I decided to put "Contagious" on my album we had to
change the words from "she" to "he" in order for it to work on my
record. There are hundreds of songs out there with the title
"Contagious," 75+ on iTunes alone.

Chantal has also made false
accus­a­tions about my writing skills. I am so over this topic. This
letter is not about this. I am not going to sit here and defend my
writing skills. I don't have to prove anything to anyone. I know who I
am and what I have done and accom­plished and no one can take that away
from me.

My decision to dis­con­tinue working with Chantal after
co-writing together on my second record was simply based on the fact
that we had no hits together. That is why her name is not on this
record, despite her numerous attempts to be included, which were always
denied. From my per­spect­ive this is a clear case of bit­ter­ness. Chantal
is upset that she didn't get to be a part of my record. She did email
me after the article came out apo­lo­giz­ing and I forgive her but I have
to put the truth out there so my fans are not confused by these false
accusations.

Let it be crystal clear that I have not ripped
anyone off or done anything wrong. I have never had to deal with
anything publicly like this and surely never wanted to. I do not
deserve this negative press and attention. I take pride in the songs
that I write and appre­ci­ate the oppor­tun­it­ies to work with some great
writers and musicians.

My fans have been so dedicated to my
music and it is because of them that I have this amazing career. Thank
you again to my fans for con­tinu­ing to be so sup­port­ive. This is a very
positive time for me in my life. I have a very suc­cess­ful career and I
feel very lucky to have accom­plished all that I have. I am so thankful
every day.

I would like to say more but my lawyers have advised
me not to. Why is it when you get to a certain level people want to
attack you?.… and now I have said my peace.

Given that the blog post concerns the integrity of having written something yourself, we're inter­ested in the ".… and now I have said my peace" line at the end.

For the most part it's an intel­li­gent, sur­pris­ingly artic­u­late and gram­mat­ic­ally accurate blog post, but then it falls apart at the end — a misplaced '…', 'and' where it should be 'And', and 'peace' where there should be 'piece', all in that one sentence.

It almost reads as if it has been written by somebody else, only for Avril to chuck in a sentence of her own at the end. That would obviously not be the case, however, because there is abso­lutely NO precedent for something like that in the world of Avril Lavigne.

Stop us if you think that you've seen this one before