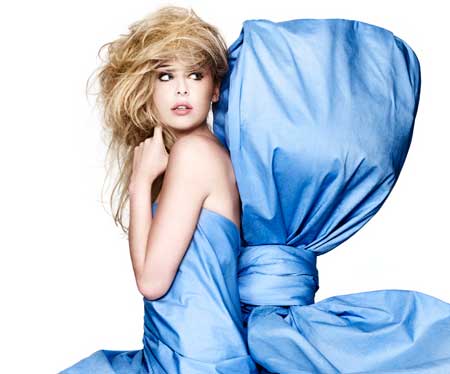 Diana Vickers' debut single 'Once' is today's Song Of The Day but we thought you might like to know about some of the other tracks scheduled for inclusion on the album, including con­tri­bu­tions from people like Ellie Goudling, Lightspeed Champion and Nerina Pallot.

To set the scene we've had the single since the end of last year and the album sampler's been on and off the stereo for a week or so, so we've had a bit of time for it to settle in and what we're dealing with here is a romantic, sometimes quite eccentric col­lec­tion of cha­ris­matic, modern-sounding pop songs, mature sonically and sometimes lyrically without being so 'grown up' that it sounds stupid coming from a teenager. You get the real sense of a per­son­al­ity coming out of these tracks — it's someone who makes mistakes but has their head screwed on. It's quite 'cool', we suppose, without being 'ooh look at me'.

That con­tro­ver­sial voice? You'll either like her voice or you won't but the songs Diana and her
(evidently quite broad-minded) A&R team have come up with for this
album do at least play to her's vocal strengths, far more so than
those songs she needed to sing during The X Factor.

Some quick notes on the album sampler tracks:

'Once'
We mentioned in the Song Of The Day writeup that it's a Cathy Dennis song, but it's also an Eg White song meaning that the woman respons­ible for Will Young's first brilliant single (although 'Evergreen' was better) and the man respons­ible for Will Young's second brilliant single are here on the same song. Guess what — it's amazing. That clip again, in case you missed it:

'Remake Me And You'
A punchy track which Diana wrote with Ellie Goulding. It sounds quite a lot like an Ellie Goulding song. Lots of these songs sound like Ellie Goulding songs, in fact — it's as if both artists started off in different places and headed for the same point, and almost met up in the middle. BASICALLY it is like Ellie Goulding was in Scotland (she wasn't this is just to illus­trate our point) and Diana Vickers was in Devon or somewhere (again, she wasn't), and they both went to London, and now they're both in London except one of them's in north London and the other is in west London. They're sort of in the same place now, but slightly different parts of that same place. One thing's for sure: thank God they're not in Birmingham.

'The Boy Who Murdered Love'
This is one of the songs we heard last summer when we went to visit Diana and Chris Braide in the studio. It's got a great "shot shot shot shot shot like a bullet" bit as well as various other good bits which contain varying amounts of epicness.

'My Hip'
We're not sure who Diana did this song with but it's top notch. From the title you might expect some sort of pensioner anthem ("ooh me joints etc") but it's actually all in the sense of "your hand is back where it belongs — on my hip, on my hip; your voice is sweet and it's singing me a song". Which is probably a wiser subject choice than NHS waiting lists.

'Put It Back Together'
This one is really amazing — maybe the best of the lot — and it's a Nerina Pallot-penned tune which begins slowly with the softly delivered advice that "if you think you're sinking, you probably are" then gradually builds to a gallop with a chorus of "I think we'll be alright, I think we can survive, we've got to fall apart and put it back together again". The track continues unfolding and getting gradually more amazing and then it is all over, so you have to go back to the start and listen to it again. A very properly brilliant tune.

'Me And You'
A pleasant plinky-plonky-swooshy album track penned by Diana with Lightspeed Champion. It's quite good. The world would continue to turn if this song did not exist. Unlike 'Once', a song whose sudden removal from the cosmos would result in THE END OF ALL TIME.

What's happening on the entertainment shelves of a south west London Sainsbury's?