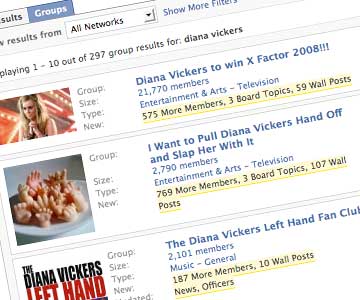 Group: I Want to Pull Diana Vickers Hand Off and Slap Her With It
Size:2,788 members

Group: Get Diana Vickers and her stupid fucking hand off X Factor!!
Size: 1,980 members
("I am going to make it my mission to travel down to London and cut off
her fucking left hand if she does not stop touching her face with it.")

Group: People who think Diana Vickers (X Factor) should put some bloody shoes on!
Size: 195 members
("She needs to put some shoes on and stop stroking her face during every performance.")

Group: X factor Diana Vickers left arm should be strapped when she is singing
Size: 151 members

WHAT HAVE WE LEARNED FROM THIS?
Not many people think Diana sounds like a peacock. Beyond that there are no dis­cern­able trends.

This has to be the final word on Zavviwatch