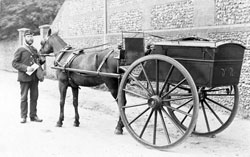 Dave Grohl (pictured on tour, right) was on Radio 4's Today Programme this morning talking about Nirvana — as one does — and the next Foo Fighters album. Talk turned to the album being recorded on tape rather than using digital tech­no­logy.

"Unfortunately," Dave said of digital recording, "the options are unlimited."

"UNFORTUNATELY, THE OPTIONS ARE UNLIMITED."

We would have choked on our corn­flakes were it not for the fact that a) we were not eating corn­flakes and b) we learned at an early age, like most human beings, to process alarming news in such a way as to not prompt an invol­un­tary throat spasm. But what a ridicu­lous thing to say. We can under­stand people going back to analogue for lots of reasons like authen­ti­city or a fet­ish­ised idea of times gone by etc etc, but
the fact that it opens too many doors, allows for too many pos­sib­il­it­ies or removes too many limits is a bit odd.

"I didn't want to do anything I hadn't done before."

"I wanted absolute certainty that our fans would not hear something new."

Come on Dave. Get a grip. And when you've got a grip, get a drum machine. CHEERS.

Jessie J is in talks to write a musical

A song by Belle Amie. Don't get too excited