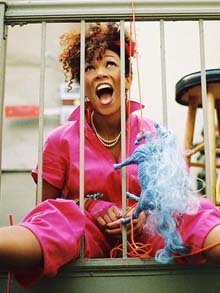 Some people will remember Imani Coppola and some people won't. She was launched as a proper big 'quirky' popstar a million years ago (1997) but nobody really noticed. We remember videoing one of her singles off The Chart Show once.

Since then Imani Coppola has self-released countless albums which we haven’t ever listened to but her new album 'The Black & White Album' is amazing and if you need any reason to question our judgement click here to listen to an amazing song from it. It is today's Song Of The Day and we don't just pick any old tat for that – FYI.

Here are a few reasons why we are currently obsessed with Imani Coppola's new album.

» As you will by now have read in Song Of The Day, 'Raindrops Of The Sun' is like a cross between a Natasha Bedingfield track and an India.Arie track. It is soulful and com­mer­cial and could be an enormous hit single.

»
'30th Birthday' sounds a lot like an OutKast track, is amazing and concerns the general bits and bobs involved with turning 30, being old and so on.

» 'I Love Your Hair' is a trendy camp hip-hop. It is in no way as annoying as the previous sentence suggests.

»
'John Lennon Is A Trademark Of Yoko Ono' is a complete racket and essen­tially just a load of old yelling, but much like 'I Love Your Hair' the strength of Imani's per­son­al­ity ensures that all potential crap­pi­ness is kept at bay.

It will all probably head the same way everything else she has every recorded, but if by some chance she manages to sell some records in the UK it will be a happy day.

PS: We think this is the one we taped off the telly once. It is still very good.