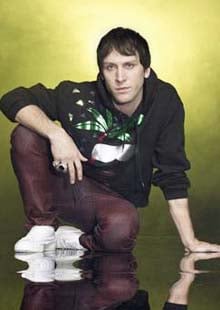 One thing it's easy to forget about people who make music is that when they leave their labels they don't spon­tan­eously combust. We were having a bit of a listen to the Ali Love album last week. 'This is very enjoyable,' we noted. 'We wonder what he's been up to in the last few months since he pre­sum­ably left Columbia Records?'.

It was time to have a look at Ali's MySpace. Once there, we found a song called 'Who's That Twat?'. Have a look at some of the lyrics and see if you can POSSIBLY figure out what the song might be about.

»
"I took their cash after seven years out on the dole."

»
"They tried to turn me into a pop celebrity, they should have given that cash to charity instead of using it to make a twat of yours truly."

What could it all mean?! We went on a fact finding mission (ie texted him then had a bit of a chat) and this is what we have discovered:

1. "I've been having a break from stuff recently."

2. "I liked making pop music and three minute pop songs, but the pople I was doing it with thought weird things about the way you had to package songs."

4. "After I left the label it took me a while to work out what I was doing. I've finished off the record I'm going to put out — it's top secret. I've finished it and it's really good basically. It's out halfway through the year. No I can't tell you anything about it. What I can tell you is that my rock powers have increased. I'm still rocking and rollling."

Details of Ali Love's continued rocking and rolling are on his MySpace, along with 'Who's That Twat?'.

The Newsdump, Mar 25 2008: From a useless feud to Estelle being rude