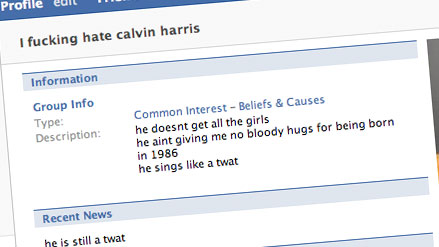 We've researched Calvin Harris Facebook groups so you don't have to. Here's what we've discovered…

I Fucking Hate Calvin Harris
36 members
A classic of the genre, 'I Fucking Hate…' has proved reas­on­ably popular but lacks depth or real emotion.


Calvin Harris Is A Wee Legend
1 member
This seems to be about the Scottish word for 'small' rather than a descrip­tion of his talent for water­s­ports, but who can say?

Does Calvin Harris really mean what he says in his recent hit?
2 members
The group notes: "In Calvin Harris's recent song (Acceptable in the 80's), Calvin insists
that he has love and hugs for all those born in the 80's. I personally
believe that Calvin doesn't really, not if he thinks about it. This
group has therefore been formed to suggest those born in the 80's that
Calvin might not really want to give love and hugs to. If you have any
sug­ges­tions please write them on the wall. It is my hope that we can
gather a com­pre­hens­ive enough list to send Calvin so that he may add
some excep­tions when next per­form­ing this song". 8/10

1 member
"A group for people who have also either gone and bought "i created disco" or enjoyed the so far released singles." We like the idea of not basing one's enjoyment of music on whether it has 'soul' or not but still ref­er­en­cing its lack of soul in relation to that enjoyment. 'Soulless' — a good word for every self-loathing pop fan.

Calvin Harris must die
4 members
Description: 'self explan­at­ory'. In a topic titled 'Best Way to kill Calvin Harris', 'forklift to the face' is nominated.

Calvin Harris is a cunt
7 members
Another classic of the genre. "His music, his voice, his face. It all screams cuntiness."

AMERICA, I WAS THE FIRST TO DISCOVER AND LISTEN TO CALVIN HARRIS!

7 members
"Calvin Harris may NOT go main­stream in the US! The US doesn't deserve to listen to Calvin once he goes mainstream!"

I SECRETLY LUST AFTER CALVIN HARRIS
9 members
The group summary notes, rather optim­ist­ic­ally, that this is "even if you're not a girl or you're not into boys".

Calvin Harris is a musical genius
65 members
The comments on this group reveal a lone voice of dissent. "saw calvin at fre­volu­tion in newcastle last monday!! werent too
impressed to be honest i left early and went to watch maximo park." Oof!

Calvin Harris should have been shot in the 80s
18 members
Because children being murdered is always fun. Cheers for that.

That's all very well but what about the next Girls Aloud album?

What's all the fuss about Sam Sparro's new single sleeve?