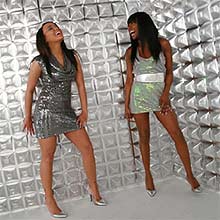 We are loving the quite toetap­pable new Booty Luv — of finding a place where they can boogie 'fame' — single, 'Shine'. Here is the amazing yet true history of this landmark (hem hem) pop single.

Step One
Be Luther Vandross. Release a quite good song called 'Shine' which samples Chic and is ignored by everyone because you are an old codger who looks like he is wearing a fluffy jumper even when he is not.

Step Two
Still being Luther Vandross, get the Freemasons to remix the song in a sexu­al­guar­an­teeu­lar fashion and watch it become something of a club hit in spite of rather than because of it being a Luther Vandross song.
Step Three
Watch Booty Luv come along and record what is essen­tially a cover version of the remix without actually getting the Freemasons to actually do the mix.
Step Four
Et voila!

The Ian Carey, Moto Blanco and Hoxton Whores mixes are good (listen here) but we don't think much of the video.

It's the joke that keeps on giving, eh viewers?

Tea and cakes with Mutya Buena

The third good thing Alanis has ever done