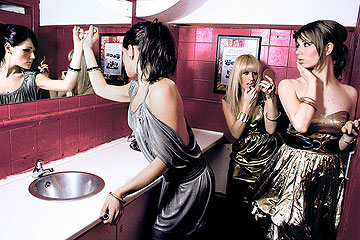 We can tell you right now that by the end of the year you're going to be so sick of exciting new girl­groups that you'll be literally banging on James Blunt's front door begging him to release a new album but, for the time being, it's something of a novelty to have one, like Red Blooded Women, come along which a) isn't crap and b) bucks the trend of the inde­pend­ent girlband world by not making unlisten­ably bad 'music' based on outmoded pop ideo­lo­gies last relevant six years ago.

…which is one of the band's songs and an example of their will­ing­ness to tackle real social issues through the medium of popular song — in this instance the problems we all face as indi­vidu­als and as a global being with flat packed Ikea furniture. It's quite jolly.

We went to see the band perform in London about a year ago because (FULL DISCLOSURE ALERT) they're managed by one of the guys who DJs at Club Popjustice. They did some songs which were a bit 'trip hop'. Fortunately they have now seen the error of their ways* and have gone mental for robotic future pop electro type stuff.

Is this the worst 'energy drink' of all time?