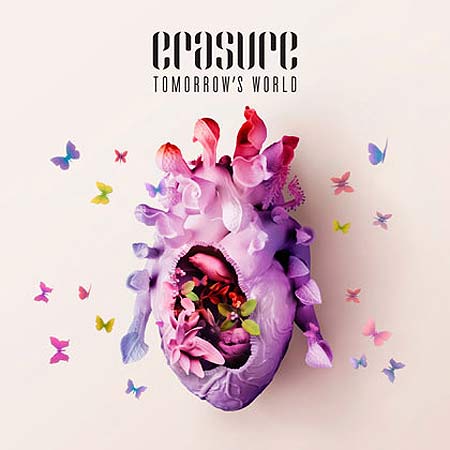 We'd sort of abandoned the idea of ever needing to use this sentence again, but: the new Erasure album is really good.

Part of this is a result of Frankmusik producing the whole thing ('Tomorrow's World' sounds, unsur­pris­ingly, like a cross between Erasure and Frankmusik) but the songwriting's really strong too. Unnecessarily par­en­thes­ised lead single 'When I Start To (Break It All Down)' is debuting on Radio 2 today. In fact it may already have popped up by the time you read this. We wouldn't say it's the strongest track on the album by any stretch, but fans of the familiar will be relieved to hear that the phrase "sweet surrender" does appear in the song.

Here is the album split into bangers and ballads.

BANGERS
'Be With You' (strong 'n' stompy album opener)
'Fill Us With Fire' (zapping noises, classic Vince Clarke wobbly­synth moment, bit that reminds us of this — amazing)
'A Whole Lotta Love Run Riot' (this one is very good)
'I Lose Myself' (this one is also very good)
'Then I Go Twisting' (the most Frankmusish song on the album; rhymes "think I'm going schizo" with "I live in a disco")