Here is another picture of Delays with more cheerleaders. 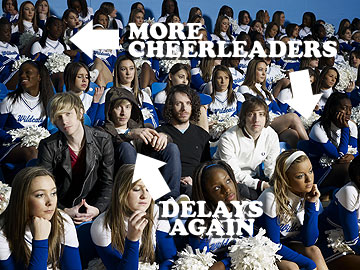 That was another picture of Delays with more cheerleaders.

We like this one because it's turned the whole 'Delays and some cheer­lead­ers' phe­nomenon into a pop version of 'Where's Wally?'.

In many ways this heady trinity of popstar, cheer­leader, 'Where's Wally?' is the 'fire triangle' — heat fuel oxygen — of the pop world. Will any other band ever come close? That's what was wrong with the 'Smells Like Teen Spirit' video, really. It had popstar, it had cheer­leader, but it had no 'Where's Wally?'. No wonder Kurt was so troubled. To have been that close to achieving and really embracing pop greatness, and to have missed it… Well, it's difficult to imagine the pain. Poor Kurt. :(

The Newsdump, March 07 08: from Westlife on fire to Whitney not planning to retire