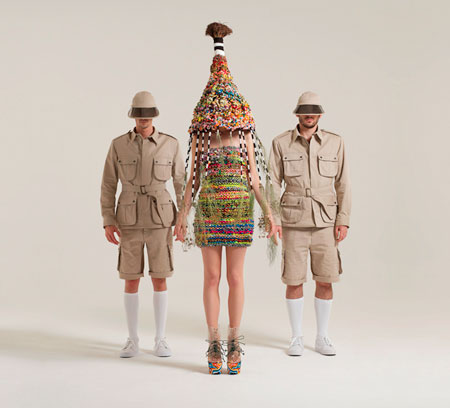 Remember when everyone and by everyone we mean some blogs and a handful of people who read blogs was talking about French tune'smiths' Yelle? It seems like an awfully long time ago and it is hard to remember what all the fuss was about really but we seem to recall some enjoyable music floating around with Yelle's name on it. 'Je Veux Te Voir', that was one of their songs. Didn't they have something to do with Riot In Belgium as well?

Anyway let's not dwell in the mid-2000s because as Bitter Fingers points out there's a new Yelle tune by the name of 'Safari Disco Club' and it is extremely great.

[youtube]QYaq19ywGdo[/youtube] The best thing is you can download it at an austerity-Britain-busting NOUGHT POUNDS at the Yelle website.

There is an album out in March. We predict it will feature 3 (THREE) amazing songs, two that are alright, and a load of old rubbish to make up the numbers.

Worth a listen: songs from the Same Difference album