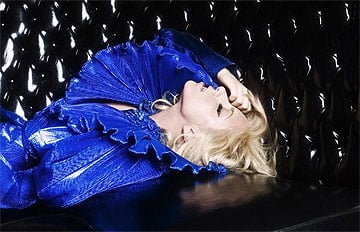 We featured Lady GaGa's brilliant single 'Just Dance' as Song Of The Day last week. If you didn't see it or if you fancy seeing the video you are in luck because the video is just what you will find in the little box directly below this bit of writing.

The track positions Lady GaGa as a cross between Christina Aguilera and Rihanna — two not entirely unlike­able modern lady popstars — but there seems to be more than just that to this 22-year-old. She's being pitched in the States as 'the real deal' (singer,
song­writer, multinstru­ment­al­ist, Lower East Side club animal etc) and
if it's all true she's shaping up as one of the most interesting
US pop artists in recent memory, and we can't help but feel that if a
young Madonna hit New York now in search of pop stardom this is pretty
much what she'd pull off.

According to our iTunes playlist Lady GaGa has three other songs which you might like to know about.

1. 'Nothing I Can Say (Eh Eh)'
…which is a sort of Rihanna-esque mid-tempo 'jam' with a brilliant "there's nothing else I can say, eh-eh, eh-eh, I wish you never looked at me that way" chorus and some great blippy synthy bits.

2. 'Love Games'
This is in the Top 100 songs of the tax year 2008–2009 for one line alone: "let's have some fun, this beat is sick, I wanna take a ride on your disco stick". We don't know what Lady GaGa means by 'disco stick' but years at the coal face of popsong listening tell us that she might be referring to big cocks.

3. 'Money Honey'
…which starts off a bit like 'Push It' and is all about loving having loads of cash but also liking a bit of a kiss or something. The chorus is along the lines of "when you give me k‑k-kisses, that's money honey, when I'm your lover and
your mistress, when you touch me it's so delicious, that's money honey.
That's M‑O-N-E‑Y." We haven't tran­scribed those lyrics properly FYI, but you get the general idea: 21st century 'Material Girl'. Also includes reference to "finer things", a fantastic lyrical cliche right up there with rhyming 'cool' and 'fool'.

Lady GaGa's album 'The Fame' is out in the States in July — expect to see her on UK 'soil' later in the summer, unless the UK label bottles it or whatever.

What's happening in the iTunes chart?

McFly are back! And they've got quite good again…