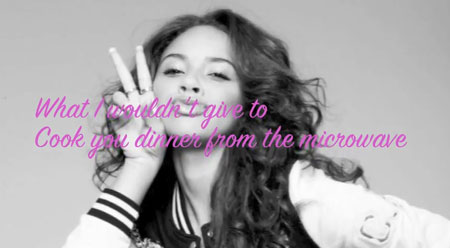 After the rather splendid double whammy of 'Good Girl' and 'Happiness' Alexis Jordan's album was a huge dis­ap­point­ment, and it was the big ballad moment 'Laying Around With You' — a song about rela­tion­ships pre­sum­ably written by but certainly aimed at people who have never been in one — where we lost our patience. We wondered at the the time whether (even if just as a public service) we should draw attention to the song's seis­mic­ally bad lyricism but we thought it might all just go away.

Sadly, 'Laying Around With You' is Alexis Jordan's next single so we must reluct­antly escalate the situation to DEFCON 3.

We don't know if this is someone at her label's idea of a joke but, in yet another example of a lyric video for a song whose lyrics really would be better off not having any attention drawn to them, someone has knocked up something quite special for 'Laying Around With You'. We don't know if the low quality execution is this person's comment on the lyrics them­selves, or if the video, much like the song itself, is shit by accident. But let there be no doubt, this is actual shit.

('Thanks' to Sally for bringing this pop­cul­tural milestone to our attention.)