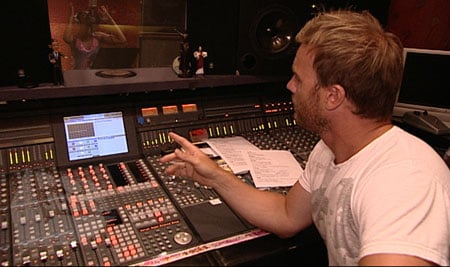 As should have become clear over the last decade Alesha Dixon is amazing. This is solid gold pop fact.

Anyway she was up a mountain recently and she bumped into Gary Barlow who also happened to be there, and Gary said, "how would you like to be pointed at in my recording studio?" and Alesha said, "oh alright then", and while she was in there being pointed at (PICTORIAL EVIDENCE ABOVE) she also just so happened to co-write a song with GB. The song is called 'To Love Again' (which sounds strong 'n' empower­ing for the ladies does it not), it's out as a single on November 15, it's being chucked onto a re-released version of 'The Alesha Show' (subtitled 'The Encore') which is out the following week, and it's poten­tially quite good but we haven't heard it yet so we'll report back in due course.

No it's fine there's just something in our eye

Tinchy Stryder — 'You're Not Alone'