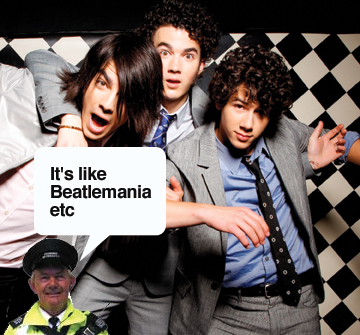 It wouldn't be a 'suc­cess­ful US band comes to UK for whirlwind media spree' without fans mys­ter­i­ously appearing outside venues and traffic wardens appearing on local TV news reports saying "I've never seen anything like it, it's like Beatlemania etc etc etc".

For reasons far too long winded and harrowing to go into here we've been sent The Jonas Brothers' upcoming itinerary and thought you might like to see it as it's quite inter­est­ing to see what bands get up to in pro­mo­tional tours even if you're not a teenage girl prepared to risk being bum raped 100 miles from home in exchange for the privilege of taking a shit mobile phone  picture of a popstar as he walks between a stage door and a waiting people carrier*.

* This is our way of saying that if you are planning to stalk the band, make sure someone at least half respons­ible knows what you're up to, and don't do anything stupid that puts you in danger.