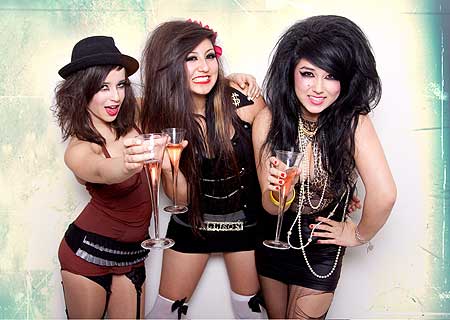 If you're a fan of Ke$ha's 'look at me I'm drunk LOL' schtick you might find Californian three-piece Millionaires — launching next year in the UK, having signed a deal with B‑Unique — are up your street. They make Ke$ha look like Susan Boyle, and have songs called things like 'Alcohol', 'Just Got Paid Let's Get Laid', 'I Like Money' and 'Talk Shit'.

This is the 'Just Got Paid' video.

As you can tell it's all a bit 'yes well done ladies how about a nice cup of tea' and we suspect that the pre­dict­able slew of furious Daily Mail articles form a sig­ni­fic­ant part of their early UK marketing strategy but we've felt for a while that some of their tunes (and some of the pro­duc­tion) make the band more than just flimsy web-friendly tryhards. We very nearly put up some bits about the band about a year ago and for various reasons (not least the depress­ing slog of writing an intro­duct­ory piece about an act with a quarter of a million MySpace friends) we swerved it, but Melissa, Allison and Dani are in the UK RIGHT NOW and if their plan pays off the trio will be unavoid­able in the coming months.

They'll be kicking things off with a download of 'Just Got Paid…' but today's Popjustice Song Of The Day is one of the band's new tracks, 'Prom Dress'…

…and if you're inter­ested in seeing them live they're in Leeds tonight, at Death Disco (London) tomorrow, in Portsmouth (!) on Thursday, then back in London on Friday for two more gigs, followed by a Glasgow date on Saturday. Full details on their MySpace.

(Amusingly, the post we wrote directly before this one accuses a different girlgroup of lacking Pussycat Dolls' "subtlety or complex feminist agenda".)