This is Abigail Wyles. Don't be alarmed — the two heads thing has been done digitally. Below you will find one of her songs — it went online twenty hours ago, appar­ently, and it's called 'Mantra'. It starts off a bit "get on with it" then by the time you get to the chorus it's all quite "oh this is jolly good isn't it".

Let's have a closer look at that artwork. Abigail is signed to Chase & Status' MTA Records, she's based in London, she does a lot of work with another promising talent called Holly Simpson, she loves things like Fleetwood Mac and Eurythmics, and we're just copying things off the MTA website now but the basic point is that while she's not exactly likely to whack out a song in the vein of Kelly Clarkson's 'Stronger (What Doesn't Kill You)' in the fore­see­able future she's still rather good.

HERE SHE IS AGAIN, THIS TIME WITH NILE RODGERS.

(That's Abigail on the right — the other people in the photo are Chase, Status, 'Rodgo', Holly Simpson, and the UK's Number 4 Danny Dyer lookalike, available now for private parties and corporate events.) (Who do you think is wearing the best top in this picture? We'd say Holly to be honest, with Abigail taking an admirable second place in the Best Top chart.)

So there you go. A new popstar to keep your eye on. Probably the sort of popstar who wouldn't neces­sar­ily describe them­selves as a popstar, but that's most popstars these days isn't it?

The Wanted have apparently recorded thirty songs for their new album 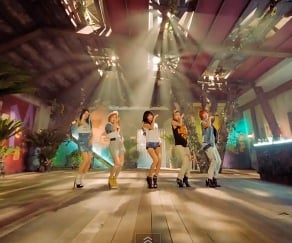