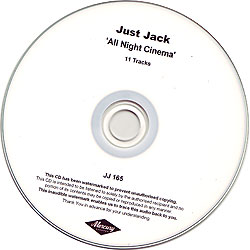 This was on the stereo the other day: Just Jack's new album.

We'll be honest, viewers, we've seen a lot of sped-up footage of people queueing outside reality TV auditions over the last couple of years, we think we've got the general idea of how 'Stars In The Eyes' goes, and we weren't exactly clawing at the door of Mercury Records demanding a new album from 'The Jack'.

As it happens this album is properly quite good.

We had it on the other day when we were doing some stuff. There was a brief moment earlier today when we thought we were going to put it on again but at the last minute it was decided that the Royksopp album should in fact go on the stereo.

What we are saying here is that on the basis of having half listened to it, once, a few days ago, this album is great. Quite dancey and elec­tronic but with big tunes. Not quite so 'broadh­seet' this time around. (This is a good thing.)

Some of it might be online for you to hear. Some of it might not. If you use a search engine like Google or Yahoo to search for something like "Just Jack All Night Cinema stream" it might throw up some ideas, like YouTube clips or his MySpace or something. He might even have done a deal with someone like Last.fm so that you can listen to his album there ahead of release. Royksopp have done that, hence us not being able to do you a clip of the amazing Robyn track.

We seem to have drifted away from the original point, somehow.

What number will the Saturdays single get to?

Starsailor — 'Tell Me It's Not Over' (Thin White Duke mix)