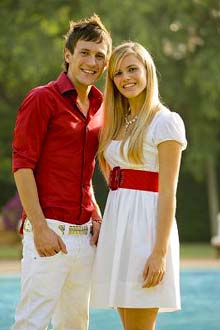 Yesterday we asked you, the Popjustice view­er­ship, to suggest a song Same Difference should cover for a future b‑side.

Not that b‑sides really exist in this day and age but you know what we mean.

Unusually — probably because there were thirty bags of Haribo on offer — this has been one of the most popular com­pet­i­tions we've ever run and we'll be making the final draw on Friday so if you've got any ideas of
your own just email them over to [email protected] and
we'll take a look.

In the meantime, here are a small handful of the sug­ges­tions you've sent in.

"They should cover TEETH OF THE LIONS RULE THE DIVINE by american drone band EARTH for their next b side and live per­form­ance at ALTON TOWERS as 17 minutes of low end roaring feedback will fit perfectly right alongside their stage set next to THE OBLIVION."

"They should cover 'Lemon Incest' by Charlotte and Serge Gainsbourg."

"They should cover ROCK BOTTOM by Lyndsey de Paul and Mike Moran."

"I think the insanely talented duo should cover Usher — Make love in this Club. How much fun would that be!! Imagine the video!!"

"The b‑side I think they should cover is: Dead of Alive, Something in my House."

"Same Difference needs to cover "Leaving the City" from Róisín's debut album. Let's face it, she wrote some quite amazing songs on there, but pop music does well without the sound of whatever may be in Ms. Murphy's purse at the time. That song is just begging to be reworked with some REAL syn­thes­isers and a cowbell."

"Same Difference should cover Lullaby by The Cure as a future b‑side. I'd love to hear a sunny side version of this quite brilliant, if quite gloomy track."

"Slipknot — Wait & Bleed. But its obviously got to be a 'charity b‑side' affair, meaning that it will actually be released with a rather cheap video shot with dying african children…same dif­fer­ence will be on a merry go round with sad faces (obviously in respect of the dying children). To stave off confusion from the general public it will need to be released with many radio 1 djs (who are the word of god) saying its meant to be 'ironic' that same dif­fer­ence are in fact making a comment on the estab­lish­ment, and something to do with america being shit maybe. There you have it"

"Same Difference should cover 'Sliding Through Life on Charm' by Marianne Faithful."

"Journey's "Don't Stop Believin" or Pet Shop Boys 'Bet She's Not Your Girlfriend" or Donna Summer's "If It Makes You Feel Good" or AC/DC's "Sink the Pink"."

"MICHAEL BOLTON. CAN I TOUCH YOU THERE. AMAZING."

"50 cents candyshop should be the cover on their third single"

"In response to your question asking which song Same Difference should cover for a future b‑side, the only answer is clearly the song from the Moonpig ad. They have already whetted our ferocious appetites by appearing in the infamous 2008 Popjustice Moonpig Guess The Artist Contest, and the music loving public surely needs to hear them take on the full com­pos­i­tion in their unique style."

"I believe Same Difference should cover the beautiful, "Fuck Dem Other Hoes" (featuring DSD), ori­gin­ally performed by the undis­puted heavy­weight hip hop gang­stress herself, Khia Chambers.  Failing that, something off the High School Musical soundtrack. "

"Same Difference should cover David Hasselhoff's 'classic' single Jump In My Car. Not only is the song cheesy enough to be covered by Same Difference but it has the duet aspect too.  Not that I condone incest though."

"in the spirit of recycling things, I shall recycle the same answer I use for every question of this nature and say 'Raining Blood' by Slayer. one day, one of them will do it, and I won't know what to make of the whole thing."

"For the Same Difference contest, i think that they should cover "Erotica" by Madonna for a B‑Side. It would really be a pleaser for their fan base!"

"Surely Kate Bush's 'The Kick Inside'?"

"Same Difference should cover Nine Inch Nail's 'Closer' for their next b‑side but to make it more suitable for their market they can replace 'fuck' with 'hug' so it's basically a song about wanting to hug you like an animal. An accom­pa­ny­ing video of them giving cuddles to rabbits, kittens and other various cute animals could easily be done on their budget of £2.73 and an old Toffo."

"Love Is A Battlefield by Pat Benetar. It'd be blatantly amazing."

"I think Same Difference should cover Afternoon Delight by the Starland Vocal Band. It'd be incred­ibly creepy and wrong, but at the same time they're innocent enough to get away with singing about how much they like to have sex in the afternoon."

"A future B‑side for Same Difference should be- Meat Loafs- Wasted Youth, I think Sarah and Sean could sprinkle some Same Difference Pop Dust over it and make it a joyous Romp instead of a soft rock rebel song."

"They should totally cover Radiohead’s creep. With an acapella harmony in an interval of thirds to open, then the faux-electric drum beat kicks in, and we get handclaps in between the pause bits where there’s no words (so it goes “I’m a creep” clap-clap, clap-clap, “I’m a weirdo” (clap-clap) “What the heck am I doing here?” “I don’t belong here”) then KEY CHANGE and a “Reach”-esque middle 8 for the “She’s running out the door” bit (with roller­skate, obvs)."

"I think they should cover "People Equals Sh*t" when the want to get away from their 'pop' begin­nings as most bands do at some point!"

"'Strange Fruit' by Billie Holiday. That should be hil­ari­ously inappropriate."

""Teenagers" by My Chemical Romance"

"For some reason, ‘The Bad Touch’ springs to mind"

"I think Same Difference should cover Gary Glitter's 'I'm The Leader of the Gang' because with the removal of this classic from the GCSE music syllabus I'm scared that Gary Glitter's private life will over­shadow his back catalogue of hits."

"Same Difference should obviously cover The Smiths' 'Girlfriend in a Coma' — partly because it would make a Smiths song listen­able (and perfect for the festive season), and partly because the original Smiths single featured a cover of a Cilla Black song as a b‑side (inform­a­tion from Wiki, not own head), and Same Difference could complete the whole hideous 'b‑sides you wouldn't expect' cycle."

"SD should cover the Pet Shop Boys' greatest b‑side of all time, 'Shameless'."

""fucked with a knife" — cannibal corpse. In Sarah's hands it could be trans­formed into something quite, quite haunting."

Yes, viewers, thanks for all that.

What do you call a dwarf on the Paris underground? A metrognome.