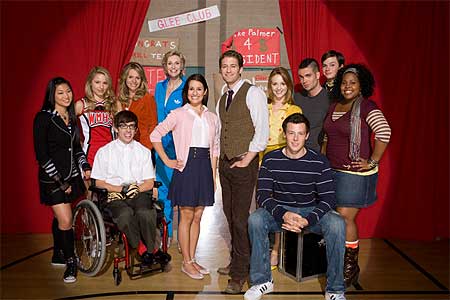 Today's Popjustice Song Of The Day is a cover of Journey's 'Don't Stop Believin'' by the cast of US drama Glee. The show is really funny and amazing and last month E4 picked it up for UK broadcast.

A quick four-point summary of Glee for those of you who haven't yet come across the show online:

» Imagine if, after the first film, the High School Musical franchise had
got really good instead of really shit.

» And imagine if Britannia High
was as funny and clever and layered as everyone involved thought it
was.

» And imagine if the songs performed by cast members included 'Alone' by Heart and 'Rehab' by Amy Winehouse and 'Gold Digger' by Kanye West.

» AND imagine if they also did amazing medleys including one total triumph involving Beyonce's 'Halo' and Katrina & The Waves' 'Walking On Sunshine'.

Actually here's a fairly lengthy trailer which tells you everything you need to know about how brilliant Glee is.

In America the show's key songs are released on iTunes after each episode airs — 'Don't Stop Believin'' has shifted half a million downloads and on November 3 the full cast album comes out. Here's the tracklisting.

You get the general idea.

When laughter turns to tears

Blake Lewis — 'Rhythm Of My Heart'