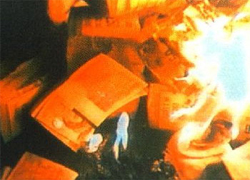 Sometimes the music industry would be better all round if instead of spending years building up to a massive disaster people took a moment at the very beginning of the project, put all their money in the middle of a field and set fire to it.

A few years ago a UK singer with a few hits and a reas­on­ably suc­cess­ful debut album under their belt was recording their second album with a view to breaking big in America. So they spent over a year flying backwards and forwards across the Atlantic recording this album with people in places like 'LA'. By the time the album was ready everyone had forgotten about the singer and attempts to raise the US profile had come to nothing. Even worse, someone realised (rather late in the day) that in order for the label to make their money back on the album's exor­bit­ant recording costs, this singer who'd faded from public memory and whose new album was pretty good but hardly amazing, would need to sell almost a million albums. So rather than go through the demeaning and thankless task of throwing even more money at the project, they cut their losses, dropped the singer and moved on.

1. Would the artist still be signed to that label now, and a huge UK success, if they hadn't aimed at breaking the US market?

3. Is it better to think small and avoid risk, or is pop all about risk? Is it a myth that pop is about risk? Is there in fact a formula to pop — just a tough one which after 60 years has yet to be cracked?

Papers in by 5pm on Monday please.