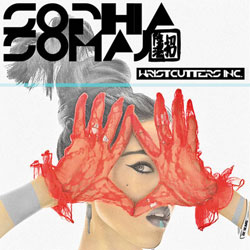 Right so you know Sophia Somajo, don't you.

Yes you do, we've written about her briefly before and they have also been chatting about her on the Popjustice forum. In the time since she also co-wrote Robyn's AMAZING 'Time Machine', and you cannot say fairer than that.

Anyway she's got a new song coming up. Fans of soon will be pleased to hear that it's out on MONDAY — it's called 'Wristcutters Inc' and it's the first single WE'RE COPYING AND PASTING THIS BIT from her upcoming debut album on Universal, Cinema Beijing.

It's got Howlin' Pelle so-called Almqvist from The Hives on it but don't let that put you off because this is what it sounds like.

Well that was quite good.

There is a bit on the email from her label that says, and the bolding is the sender's own:

Sophia will be in LA in a month now to work
on a secret project, and will be available
for interviews.

We love secret projects. We wonder what it is?

Another amazing 'n' ridiculous Nicki Minaj 'clip' (video) to have a look at.

So we went along to meet Soundgirl yesterday