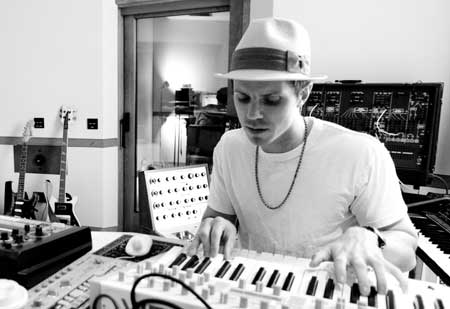 Right, let's not mess around here: the new Scissor Sisters album is amazing.

First off (well strictly speaking it's track three but it's where the album properly starts for us) there's The Big Song. It is so amazing that if it catches you at the right moment it might bring you slightly to tears. It sounds like a cross between Scissor Sisters, 'Human'-esque Killers, Abba and a thousand exploding dance­floors. It is perfectly struc­tured, it's perfectly produced and it's the perfect Scissor Sisters comeback song. In fact it's the pefect song for anyone coming back from anything — it's a big, defiant, triumph-over-everything pop record that goes from des­pond­ence to euphoria in four minutes and fifteen seconds and sweeps you along with it. The first verse outlines former triumphs and present woes ("it used to seem we were Number One, but now it sounds so far away"), then as the song builds, erupts then roars towards its close things begin to make sense again: "now we're free to be Number One, morning isn't far away, we've got a reason to keep holding on, tomorrow has become today". It's just really brilliant. There is a dodgy live version of this big knocking around on a popular video sharing website. Do not look at it. It has been there for a week or two and we have delib­er­ately not featured it on Popjustice because we know that if you see it in its state of semi-undress you will not exper­i­ence the special moment you really should feel when you hear this song for the first time.

If you're still reading and have not scurried off to the above-mentioned video sharing website you've done the right thing. A proper clip or stream of the song will be with you sooner than you might think, although perhaps not as soon as you'd like. But it will be with you in due course and it wil sound proper and amazing when you hear it. Your patience will be rewarded. You have not ruined the Christmas morning moment of the new Scissor Sisters album campaign.

Those of you who read our interview with Jake Shears from the end of last year may have got the impres­sion that this is likely be a pretty dark, perhaps impen­et­rable album or some sort of reaction against the situation the band found them­selves in at the end of the 'Ta-Dah' campaign. Well there are big tunes and radio songs here so there's no need panic, but there's certainly a feel that this album takes the band back to where we first found them. It's a nocturnal album with an opening track about sleeping all day then catching a train at midnight to go clubbing, and the album's closer seems to situate itself on a messy dance­floor at about eight o'clock the following morning. That big finish is one of our favourite tracks, in fact — it's a
bit like 'Comfortably Numb' with a 'Two Tribes' makeover, complete
with airhorns and stadium house sound effects plus a very famous actor
wibbling on about Babylon, strobes, sailors and sexual gla­di­at­ors in a
breakdown that redefines previous notions of Poppers O'clock and gives Vincent Price's 'Thriller' monologue a run for its money.

THERE ARE NO BALLADS.

Other details: two songs feature the word 'night' in their titles, two song­titles feature the word 'skin'. There's a track about hearing a song when you're out
but not really remem­ber­ing much about it. There's a feel of 'Safety Dance' in one song; another song sounds quite a lot like 'She Sells Sanctuary' to start with — it's one of a handful of tracks that recall some of the more 'Tits On The Radio'-esque moments of the first album. You can hear Stuart Price's work through­out the album, but it's a Scissor Sisters album not a Stuart Price one.

One of the things we always loved about the Scissor Sisters, and it's
something they kept on top of really well through­out their first album
campaign, was the way they could be at once incred­ibly niche
and incred­ibly big. They sold an album of songs with quite
unmain­stream topics to a very main­stream figure of over 2m people in
the UK alone. Because that inclus­ive­ness was so much a part of their
whole 'thing' we felt slightly guilty when we starting to think, during the
'Ta-Dah' campaign, that the band had lost touch slightly with the dirt
and cheap glamour that gave them their edge to start with. It felt, at
one point, as if they'd become water­logged and were beginning so sink. Well, panic over. This new album is a real cracker. It might not sell 2m copies like the first, and perhaps the band were never really meant to sell 2m copies of anything, but it's the sort of album the band should make, it's the sort of album the band needed to make, and it's precisely the album we wanted them to make. That's partly why the lyric of that big single is so important, because that song and this whole album does feel like a band storming back out of the darkness. What better way to head towards the Easter weekend than with news of an impress­ive comeback?

Who are The Royal Palms?