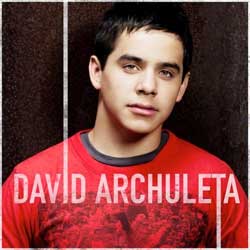 We featured 'Crush', the debut single by American Idol runner-up David Archuleta as Song Of The Day yesterday — it's classic MOR half­bal­lad nonsense but it's also an undeni­ably clever, complex song which would have made a brilliant debut single for Quigg Of The Dumper.

In 'Crush' the dominance of the brilliant "away-e-ay" bit means that the song's biggest hook — the pulsating heart of this sen­ti­mental love song — is, in fact, total nonsense. It didn't hurt 'Umbrella' with its "eh, eh" centrepiece and it doesn't hurt 'Crush'. It doesn't matter. Sometimes pop means most, and sometimes it means everything, when it means nothing.

(In Girls Aloud terms, as we know a few of you can't com­pre­hend anything that doesn't have Nadine Coyle sticking her oar in somewhere, this is something like the Jimmy Savile-esque "now-ow-ow-ow-ooh-ow" on 'Call Of Shots' somehow being more important, brilliant and breath­tak­ing than all the clever lyricism of every Girls Aloud track before or since.)

Given that labels' tendency with reality show runner-up albums is to throw on any old shit because, frankly, it's not worth wasting decent material on an artist nobody is likely to purchase a second album from, David's debut 'long player' — out last year in America but in the shops over here in March — is sur­pris­ingly good. 'Touch My Hand' is belting, Ronan Keating-esque pop, for example.

Our favourite song, however, is 'A Little Too Not Over You'.

If awards existed for song­titles alone (and perhaps they do, the last person to attempt reading through the full list of Grammy cat­egor­ies died of old age when they'd barely passed the halfway mark) 'A Little Too Not Over You' would scoop every single one. It would travel the world accu­mu­lat­ing plaudits. It would be the 'Slumdog Millionaire' of pop song­titles, an inter­na­tion­ally recog­nised benchmark against which all future song­titles would be judged. Like 'Same Old Brand New You' and various others that don't spring to mind right now but you know what we mean, 'A Little Too Not Over You' is an extension of some song­writers' habit of taking
everyday phrases — better the devil you know, I should be so lucky -
and turning them into pop songs. This is all about creating new phrases that sounds like they've been around forever and sound perfect in pop songs.

It's is almost like an megamix of phrases. An mega­phrase. A phrasea­mix. A phredley? Readers, this isn't going very well. We des­per­ately need to think of a word for this. If we can think of a word, people might think of us in the same way that they think of Simon Reynolds. We will somehow become 'music vis­ion­ar­ies' and people will pay us to write 8000 word theses any other writer could boil down to the phrases "THIS IS QUITE GOOD" or "THIS IS QUITE BAD". We are sure you can under­stand why it is so important we come up with a name for this type of songtitle. We suppose it's port­manteau, a bit. Popmeanteau? Portmantitle. Popmantitle. That's not working. Perhaps we could say it's like a sound­clash of phrases. A bootleg of phrases. A phrootleg? A fruit yoghurt!

There is probably already a word for this, isn't there.

1. Find out if there is already a word for a song title which is a phrase that doesn't already exist but sounds like it should do and/or combines two already popular phrases.

2. If no word already exists book upstairs room at pub round the corner for all-day brain­storm­ing session.

3. Upon invention of afore­men­tioned word, attempt to use word in several different pub­lic­a­tions, thus making it accept­able to the Oxford English Dictionary's 'word police'.

4. Copyright word and turn it into a lifestyle movement.

8. After three years in retire­ment attempt to invent and pop­ular­ise a second word.

10. Shock the world by denoun­cing first word in a book which becomes the defin­it­ive tome on said word.

The thing we've noticed about photos with white backgrounds

Leki & The Sweet Mints — 'Love Me Another Day'