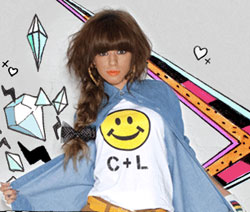 If we had all heard 'Dub On The Track' before 'Swagger Jagger', Cher Lloyd would probably not be quite as much of a laughing stock1.

It's still a bit on the posture-heavy, "I AM AMAZING HATERS BACK DOWN"
side of things — and that's a role Cher probably shouldn't be forced to
play out when the reality
is obviously so different — but it succeeds (where 'Swagger Jagger'
fails) because the chorus isn't a huge will-this-do atrocity that sounds like everyone just gave up.

Listen out for a surprise guest rap from Eoghan Quigg.

EDIT: This 'leak' has now been taken down so you will just have to imagine for yourself what a good Cher Lloyd song might sound like.

1 Yes we accept that she is prin­cip­ally a laughing stock to journ­al­ists, rofling Twitter onlookers and various other groups of people not really being targeted by this pop­musi­cu­lar campaign but you get the general idea.