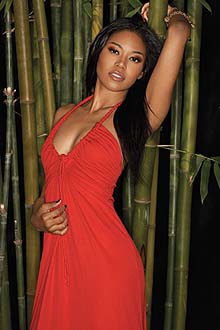 We were at BMG headquar­ters this afternoon on official Popjustice business. While we were there we listened to some new songs by Amerie.

Now then. Her new track 'Lose Control' is pretty good but this time around she has chosen not to shoot her load on the first  single.

Here is what we can remember about second single 'Crush' and potential third single 'Losing You'.

'Crush': Quite 80s and a bit slow and quite brilliant and — unlike 'Take Control' — proof that Amerie can do something other than reswizzle '1 Thing' every couple of years. People came out of their offices when this was on, just to say how much they liked it, although this 'spon­tena­ous' event might have been planned in a complex series of all-depart­ments emails before we arrived on site.

'Losing You': This one was not finished at all and a man appeared halfway through to rap something IN FRENCH. He will not be on the finished version. 'Losing You' an electro R&B track of sorts which when it is finished will be very good. We can't tell you how it goes because we were talking through most of it, but it is very catchy and was very much 'in our head' on the way out of the BMG Building Of Doom.

Amerie is shapping up to be a proper popstar in 2007 and we would like to hear both of these songs again immediately.

It's the new Popjustice podcast…

Are you ready for Love?